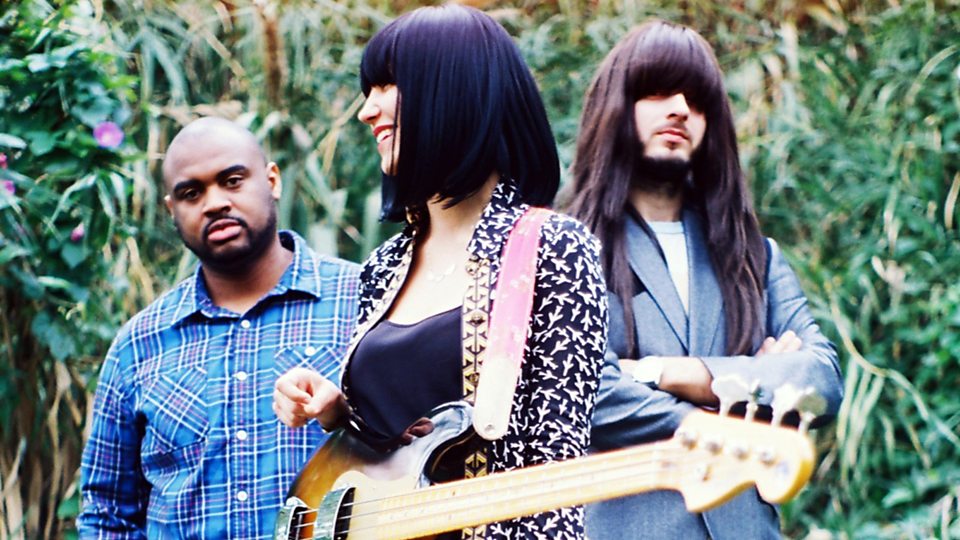 Khruangbin (/ˈkrʌŋbɪn/ KRUNG-bin) is an American musical trio from Houston, Texas, with Laura Lee on bass, Mark Speer on guitar, and Donald Ray “DJ” Johnson Jr. on drums. The band is known for blending global music influences, such as classic soul, dub and psychedelia.

Their debut studio album, The Universe Smiles Upon You (2015), draws from the history of Thai music in the 1960s, while their second album, Con Todo El Mundo (2018), has influences from Spain and the Middle East.

Debut Album – The Universe Smiles Upon You

Taking influence from 1960’s Thai funk – their name literally translates to “Engine Fly” in Thai – Khruangbin’s debut album ‘The Universe Smiles Upon You’ is steeped in the bass heavy, psychedelic sound of their inspiration

The Universe Smiles Upon You’ was recorded at their spiritual home, a remote barn deep in the Texas countryside where their first rehearsals took place. The band listened to a lot of different types of music on the long drives out to the country but their favourites were 60s and 70s Thai cassettes gleaned from the cult Monrakplengthai blog and compilations of southeast Asian pop, rock and funk. This had a heavy impact on the direction of the band, the scales they used and the inflection of the melodies; which coupled with the spaciousness of the Texan countryside culminated in Khruangbin forming their exotic, individual sound.

Whereas their 2015 debut album ‘The Universe Smiles Upon You’ was influenced by 60s and 70s Thai cassettes and compilations of southeast Asian pop, rock and funk, ‘Con Todo El Mundo’ hops east over India to take inspiration in similarly under discovered funk and soul sounds of the Middle-East, particularly from Iran. Laura Lee explains the album’s title: “My grandpa would always ask me ‘Como me quieres?’ (‘how much do you love me’?), and he’d only ever accept one response. ‘Con todo el mundo’ (With all the world).”

Sometimes the most unlikely partnerships create the best results. That’s certainly the case with Thai (influenced) funk trio Khruangbin and soul singer Leon Bridges, two Texas-based acts who joined forces for the excellent Texas Sun EP. The title track opens with haunting backroads chords before segueing into a globally-influenced melody that plays host to Bridges’ wistful, love-drunk lyrics. The vibe stays steady throughout the course of this short-but-sweet EP. It’s all sunshine and open roads, the freedom of nowhere to go and someone lovely to navigate the route by your side.

Mordechai is a story of finding yourself in unexpected places. Travel weary and without a home after 24 itinerant months of travel and touring, Laura Lee went on a hike with a family of strangers, led by a father named Mordechai. Here, on this least expected journey after so many others, she found spiritual awakening and rebirth.

We are authorised retailer for multiple turntable brands such as Mobile Fidelity (MoFi), Project Audio Turntables and Audio Technica See the full range